Today was a quieter day which was good we went on the underground again and headed along to the Natural History Museum. It was pretty busy but the place was massive so it wasnt a problem getting around to all the exhibits. I think all the other days events have taken their toll because I am not able to walk around as much without wanting to sleep on the floor! haha trust me it has crossed my mind!

There were plenty interesting things around but I made it my mission to get lots of penguin pics for my Krystle hehe! There were lots but it made me a little sad since I know they are stuffed 😦 Penguins are a pretty big deal at this museum they even had two guys giving info on them and videos … You would have loved it Krystle! 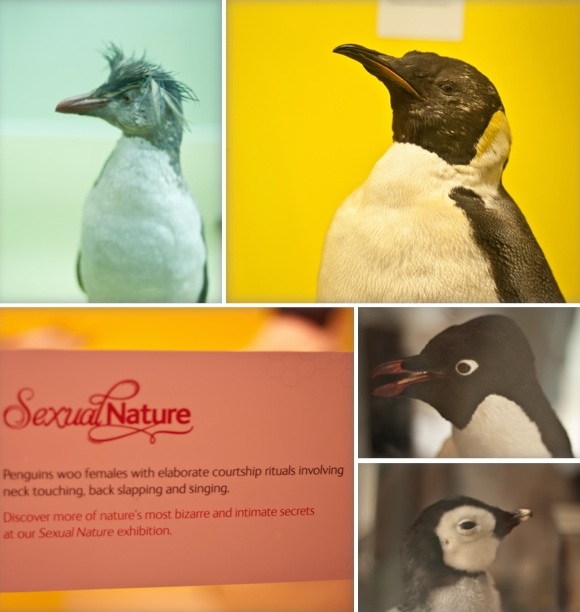 There were lots of other animals there and the Earth Hall exhibit was pretty good!

Afterwards we headed to a restaurant called ‘Bibendum’ in “michelin Hall’ for some lunch, it was french food and highly rated, but it was awful! I think we were lulled into a false sense of security with last nights meal haha!

I ordered the rare beef salad which I have had cold before and it was lovely, but the sauce that was all over this dish tasted disgusting, its beyond words how bad it was I guess the only way I could describe it is a combination of blue cheese and bugs, like ants or something stronger … not nice! Rhys ordered roasted lamb it was also served cold. They had cooked everything and refrigerated it and served it freezing cold … It looks delicious in the pics though! shame oh well! Live and learn

The funniest part was we were planing how we were going to avoid giving a tip and after paying for the bill by card we checked the receipt to see we were charged a 6.65 pound for a “discretionary service charge” haha! It gave us something to laugh about on the way to Harrods again though.

Tomorrow we are headed to Paris! I may have to do these blogs less frequently if I cant get wifi like I do here! Hope you don’t mind the new way I display the images, its just a lot easier than loading all individually online!
See you in Paris!
E