Start typing and press
Enter to search
Skip to content
1st August
Now that we have a kitchen priority number one today is finding an open supermarket so that I can cook some good food! We decided to put another load of washing on before we left so that we could get some done while we were out and it would be finished when we got back … After getting a bit carried away and buying a weeks worth of food haha we came back to find the damn washing machine was still on after about 2 hours and we spent over an hour trying to get it to stop … How does this story end? With Rhys and I … a mop and bucket and a 2cm thick tray, manually draining the freaking washing machine because we couldn’t get it to drain and spin our clothes … oh we had to do that manually too! What a nightmare … you would be surprised how much water those things hold and I tell you balancing a tray with water in it to drain is not easy!! Urghh rant over!
After getting the washing and shopping and other domestic duties out of the way it was time for Rhys to pick what to do today. Of course he chose to go to Camp Nou which is the stadium for the Barcelona football club. 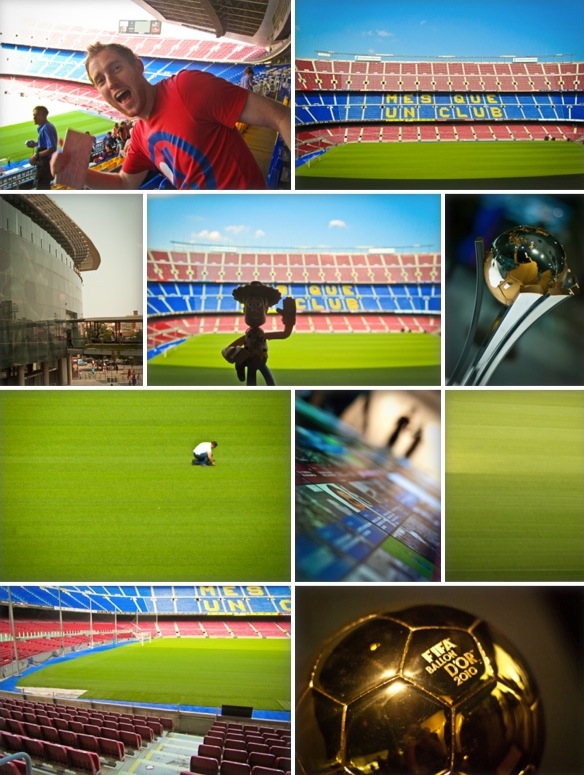 It was a long couple hours for me but I promise I was a good girlfriend for the day and pretended to be interested! Rhys loved it, which was great! Afterwards we headed back home so I could start dinner, we found a lovely dog on the way home and got to pat it which made my trip! I miss Baxter.
Dinner was nice I made seasoned chicken with potato rosti stacks, a creamy sauce and a yummy coriander, rocket salad and my favourite radish and fetta salad. Reminds me of food at home and makes me happy! I made enough food to last a lifetime though, but we made yummy sandwiches out of it for later.

After eating we freshened up and caught the metro into the city to see some Barcelona nightlife. We went along “la Rambla” which is one of the largest boulevards in the world, with it being a mile long. There were restaurant strips, street performers, people trying to sell you beer or weed on the sly haha. All very busy but it was nice when we got to the end and we arrived at the marina, which is beautiful at night and we were able to chill for a bit and look around. We walked for hours, just looking at all the restaurants and buildings.

We lost track of time and when we tried to get back on the metro it had closed. Can’t believe the metro closes just after midnight in Spain, people only just start going out to eat at that time haha
E