With a bit of research we have discovered that there is too much to do in Berlin, and with only 2 days to discover it we had to get our butts into gear and do a bit of walking!

First we headed to Alexanderplatz, this seems to be the most central spot with everything in equal distances from here, and metro lines easily accessible. In the square a German singer was having her music clip filmed, she must have been famous because people were asking for her autograph. Otherwise there wasn’t much to do here, just a concrete slab and a view of the Tv tower from below, but after Rhys ripped his jeans recently we thought it would be a good place to find a mall to buy another pair. We weren’t wrong. The first shop we went into we found the perfect pair! Thankfully, I hate clothes shopping!! We got ourselves a map and figured out where we wanted to go. 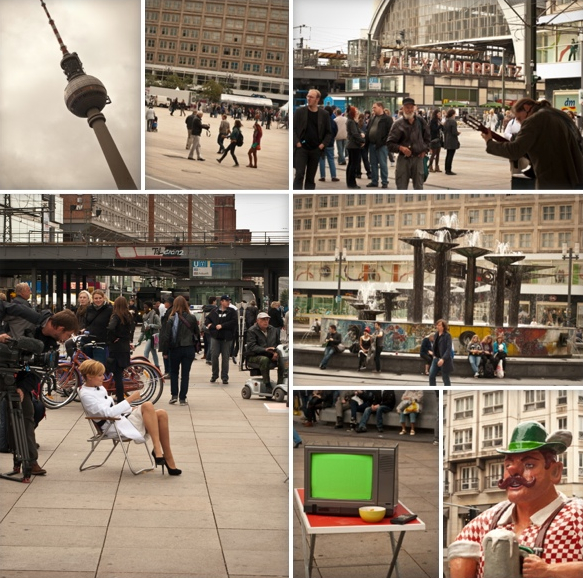 Today we thought we would do checkpoint Charlie and its museum, eat a curry wurst, find the Berlin wall and get a feel for the nightlife in Berlin, we had planned to do more but it took us longer to get around Berlin than we had hoped, mainly because we kept getting on trains and finding road blocks haha!
We headed on the train to the station closest to Checkpoint Charlie. For those who haven’t heard of this place before it is basically one of the main border crossings between East and West Berlin while the Berlin wall was still standing. It has an open air exhibition chronicling Cold War history, which would have been good if the checkpoint itself wasn’t blocked off by police and a stage that was holding an election campaign. We had to walk around the block and go through police to get to the other side for the museum. Very ironic that they picked the one spot that was once one of the only openings through the wall, and now it was blocked off for politics haha!

The museum was interesting the facts were fascinating but the way it is laid out is too cluttered. You don’t know where to look! Reading about the escapes and the things the people went through during this time was very informative though and I am glad we went. I find it so strange though that right beside the replica guard house where everyone poses for photos, there is a McDonalds right in view! They are very clever because now their logo will be in almost everyones photos, but sometimes I wonder whether it takes away from the impact of a historical place when there are McDonalds on every corner, and this is coming from a huge McDonalds fan!

After we started to walk back toward the metro and we stumbled along the Curry Wurst museum! I’m sure it would have been very cool, but we decided to skip the facts and just get a curry wurst to try. It is basically a sausage in ketchup with curry powder, usually served with a bread roll and sparkling water. It was tasty, but not something I would want to eat everyday haha!

Next, to find the Berlin wall! When we asked a local earlier in the day where to see the wall they actually didn’t even know where you could see it, but they spoke to their friends and recommended we go to the “East Side Gallery” which is the longest, best preserved stretch of the Berlin wall. A I.3km open air gallery where after the wall was taken down, artists from all over the world came and painted pieces on parts of the wall. Political statements, representations of freedom, or just crazy, probably drug induced scribbles haha. It was worth seeing! Beautiful artworks, very cool! Halfway down we found a “beach bar” These bars are usually located in places of development, this one is a permanent bar, for the moment and is located behind the wall, along the river front. It’s nothing like a beach bar, but they have put sand down, palm trees, a pool and sun beds so it is close enough. Berliners make the most of the sun and sun bake anywhere so these bars are perfect for the locals. No one was sun baking today though. It has been raining right though! YAY! So we sat undercover and watched the rain looking out to the “beach” haha and had a couple drinks and enjoyed the ambience. It was nice to just relax for a while. 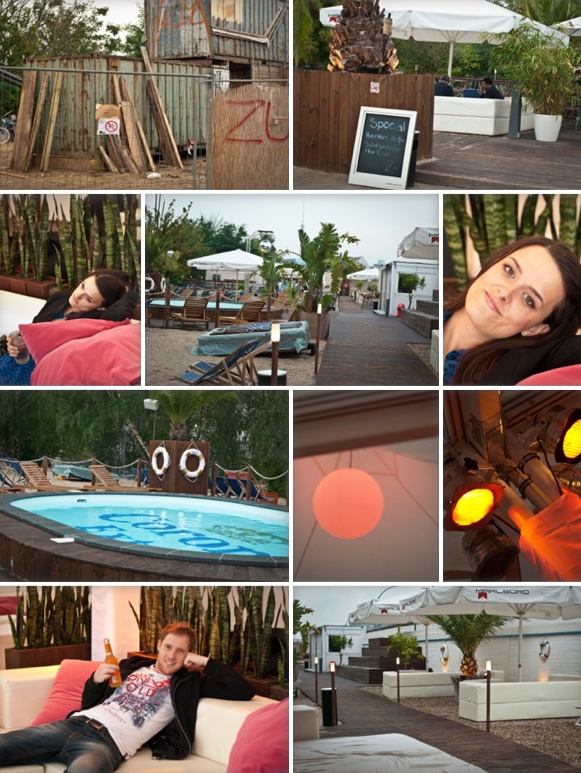 We walked the rest of the stretch of wall got some more photos and checked out on our guide a good place to eat. 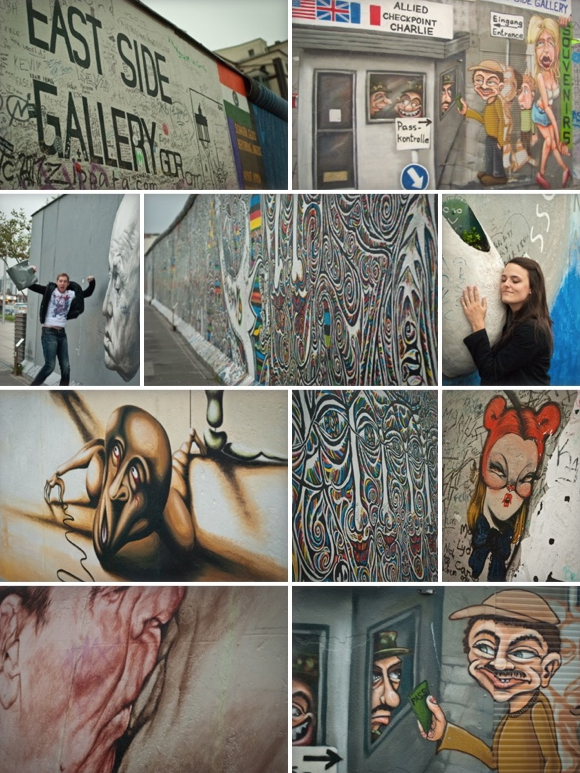 There was a restaurant along the other side of the river that looked good on reviews so we went to find it, a bit of a trek later and not much sun left we found huge metal gates, locked, next to what looked like an abandoned warehouse with the restaurant name on a poster nearby … There were people waiting out the front so we thought we would too, when we were finally let in we were told it was booked out for a private party tonight and that we wouldn’t be able to eat there tonight which we were bummed about but we decided we would just go to a cute little french restaurant that we saw up the road instead.
We got in, there was no Engish menu and the waitor didnt know how to translate it, but boy did they try! They were fantastic! We just ordered by their recommendation, first was a selection of hams and salamis, next was a braised beef cheek for Rhys and a slow cooked lamb shoulder for me. Very delicious, but very rich! They were amazing though trying to speak english and trying to help us with everything. Great find!

After dinner we thought we would find some of the nightlife. Close to the East Side Gallery there was a club called “Panorama Bar” that has been rated as possibly the best in the world, so we had to at least see it!! Along the way we stopped at the O2 because the lights where going nuts inside and there were a few people outside waiting to get in. When we asked what as going on they told us Tiesto was performing and some other DJ that I have heard of but forgotten the name haha! We really wanted to get to this club first though so we decided to skip Tiesto and keep looking for the bar. We walked and walked in the rain, we just saw abandoned warehouses, heard no music saw no lights. We saw a little bar that looked like a cubby house, but after walking for a while, it was about 11 by now and we had already been out since 11 we thought we would just head back and see what it said on the web, maybe we had the wrong address? We caught the metro back and chilled at the hotel, watched more crappy internet tv till about 2am and then went to sleep 🙂 Tomorrow there is so much to do that we didn’t do today so it will be packed! 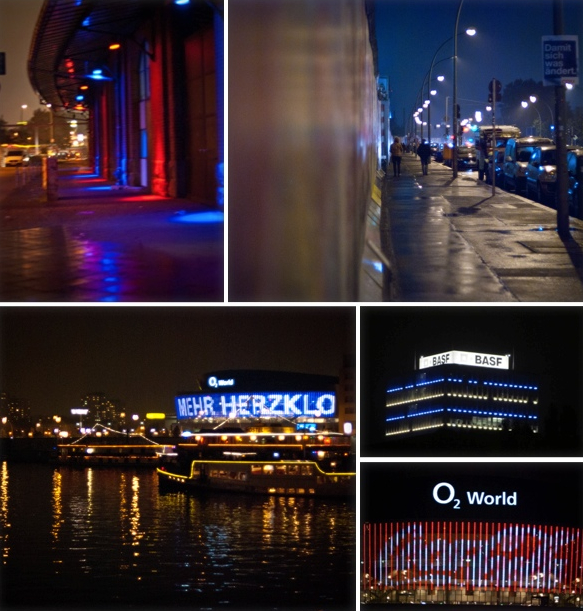