Wahh! Today is our last day to explore in New York City! Say it isn’t so … Note to you all! Give yourself at the very least 5 days in New York! You won’t even scratch the surface, but you won’t feel as sad to leave as I feel now.

Another silly early wake up from me 4am.(gross). I blogged on my glorified brick computer (took me 3 hours, sigh) and then we prepared for a day of adventure.

Today we have a LOT on the agenda! We really want to take in as much as we possibly can!

Breakfast at a cute patisserie near the hotel and then we headed to Times Square to use some of the free attraction passes that we got with our bus passes. You know the ones “Ripleys believe it or not, Madame Taussaud’s” I recommend skipping Ripleys, but I have been to the London one and the Gold Coast, both are far better than this one. 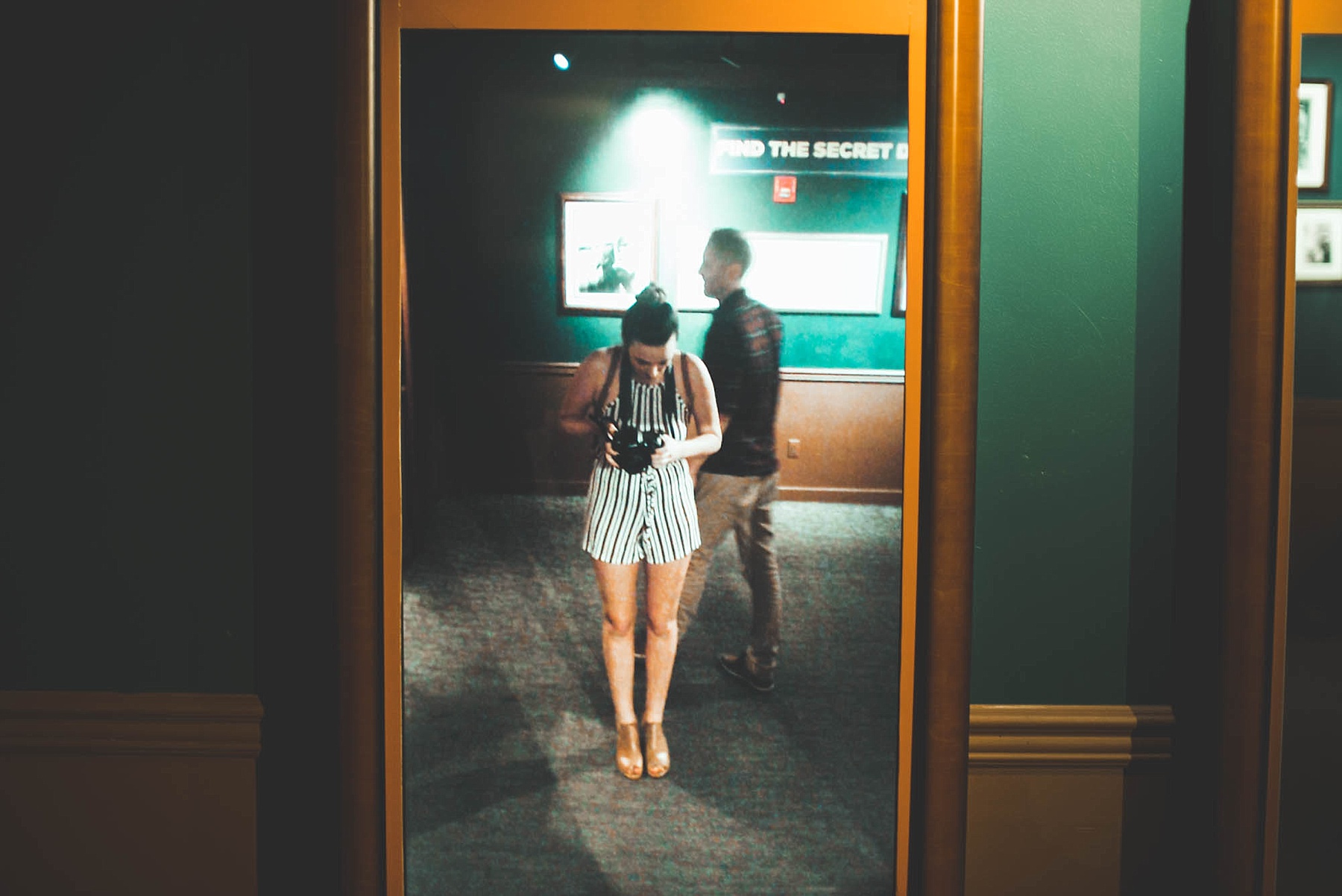 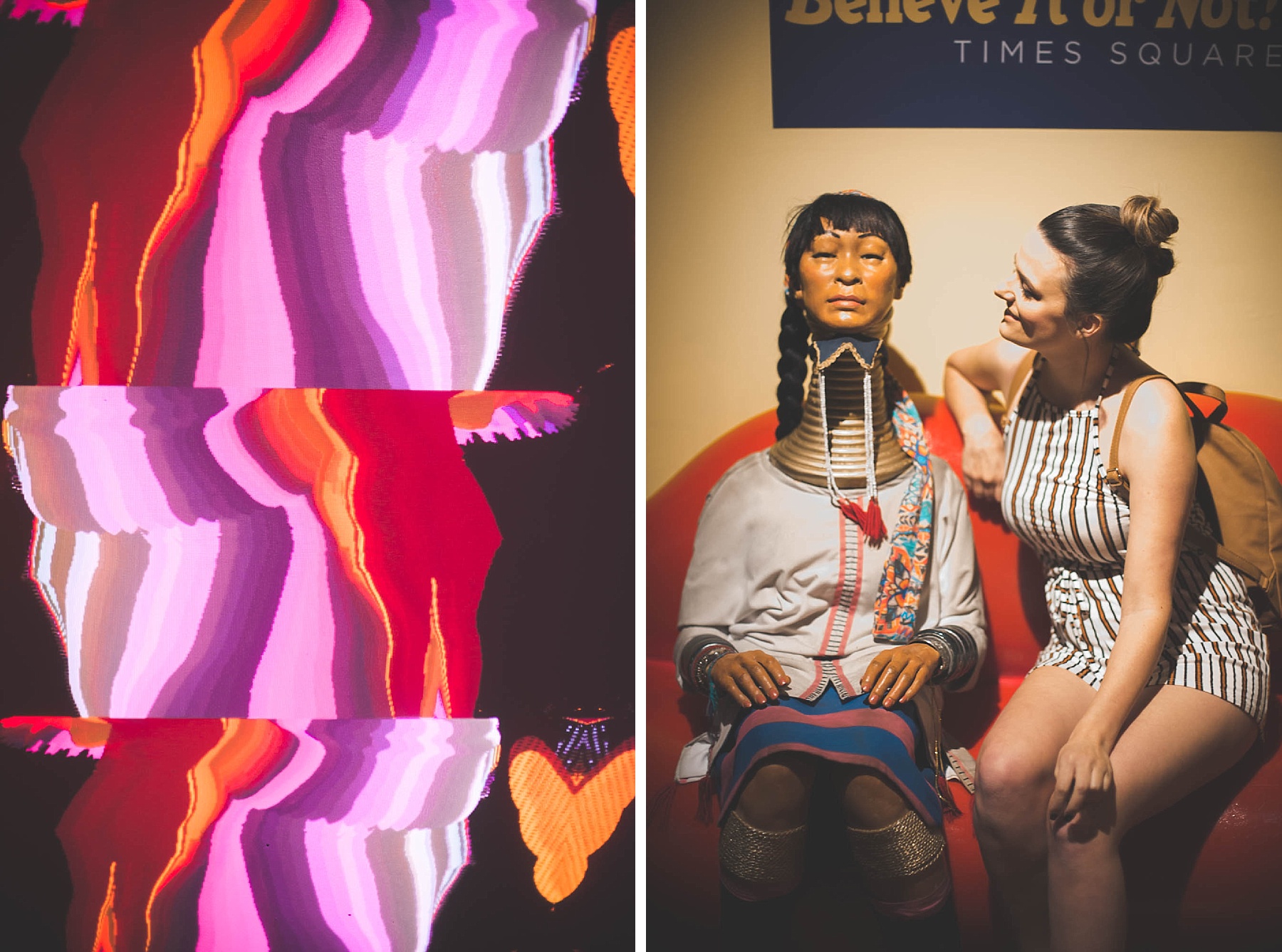 Madame Taussauds is pretty good value although rhys and I kept getting lost haha! (Standard behaviour) and I have always been kind of obsessed with it since I was a kid (remember when I won that Comp mum??) so definitely worth the visit. 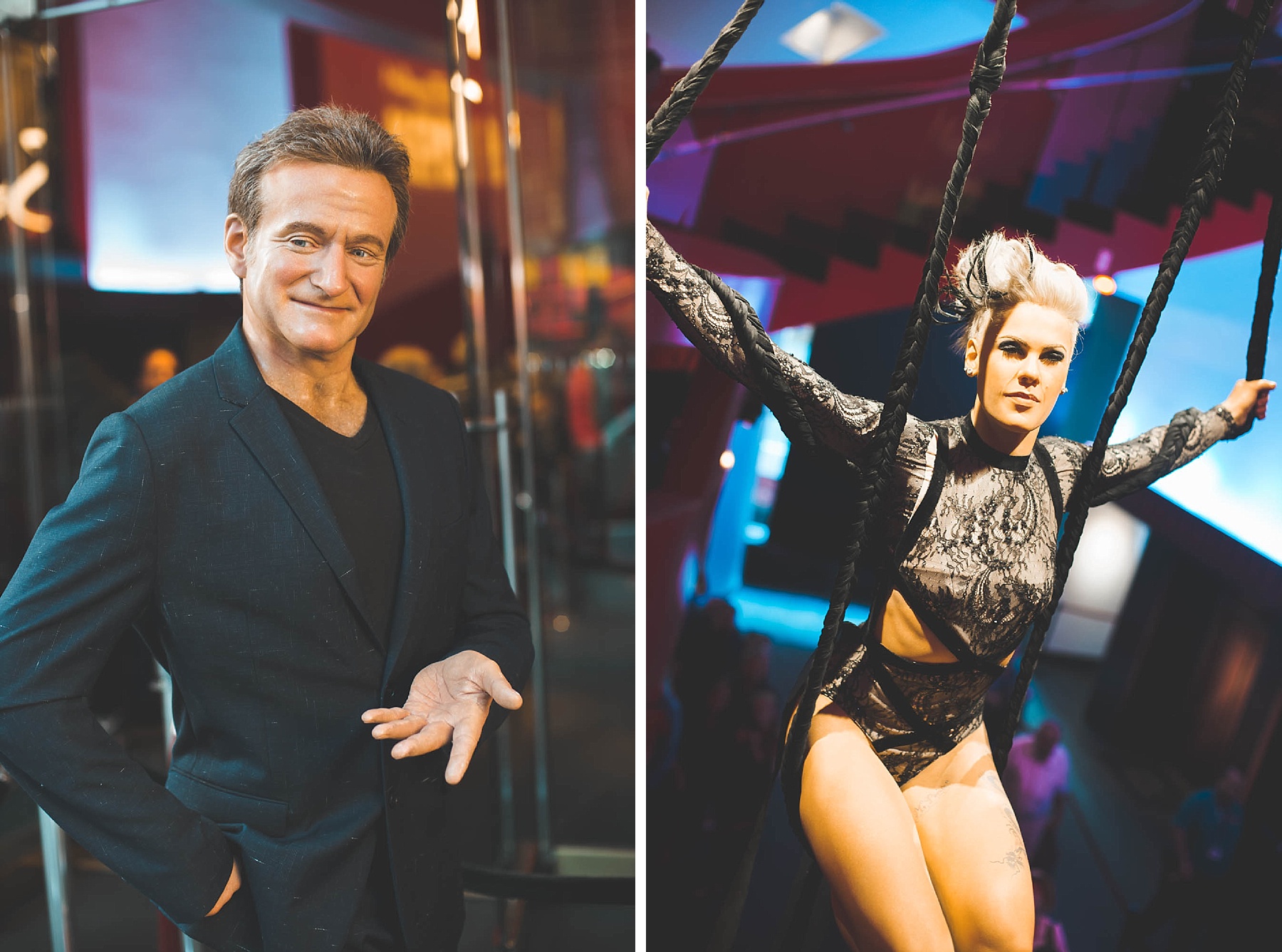 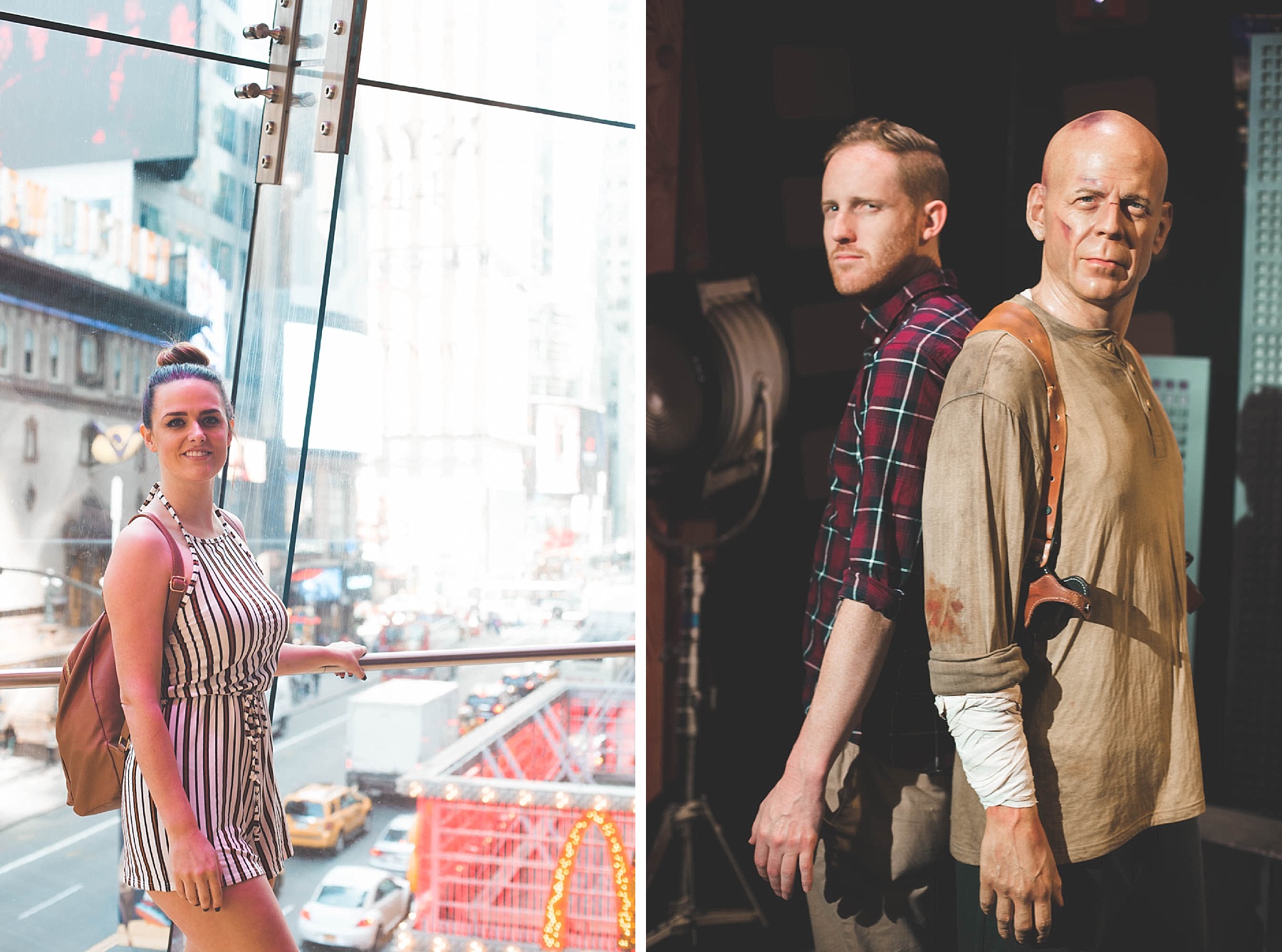 We managed to get onto ticketek in the AM and book some reasonably priced matinee Broadway tickets… and goodness me am I excited!! But first, lunch.

The flashing red lights captivated me, could it be? Is that “Five guys” Burgers and Fries?! Uhm!! HECK YES!! One bacon cheese burger down and way more fries than you could even think about eating and we were ready to head to Broadway.

What show?? Only the 9 Tony award winning Musical “The Book of Mormon”, which was effing hilarious! I was nervous thinking it would be ultra religious, but when it’s co-written by the South Park guys, Trey Parker + Matt stone, you’re in safe hands.

Many giggles later and totally on a high after watching a broadway show (and making the decision in my mind that I was meant to be born in NY) We venture onwards.

Rhys is pretty sick today, so we get some meds, and a giant pack of bandaids, as my feet have become one giant sore blister 🤢 On the way to the subway, there’s a DJ pumping great tunes, and people waiting nearby … and as we joined the crowd we realised we have walked straight into a New York Fashion week runway show in Times Square! Day made! While the fashion show happened, a bunch of people were intensely practicing Tai Chi! So much happening in one place. Did I say I love NY city??? 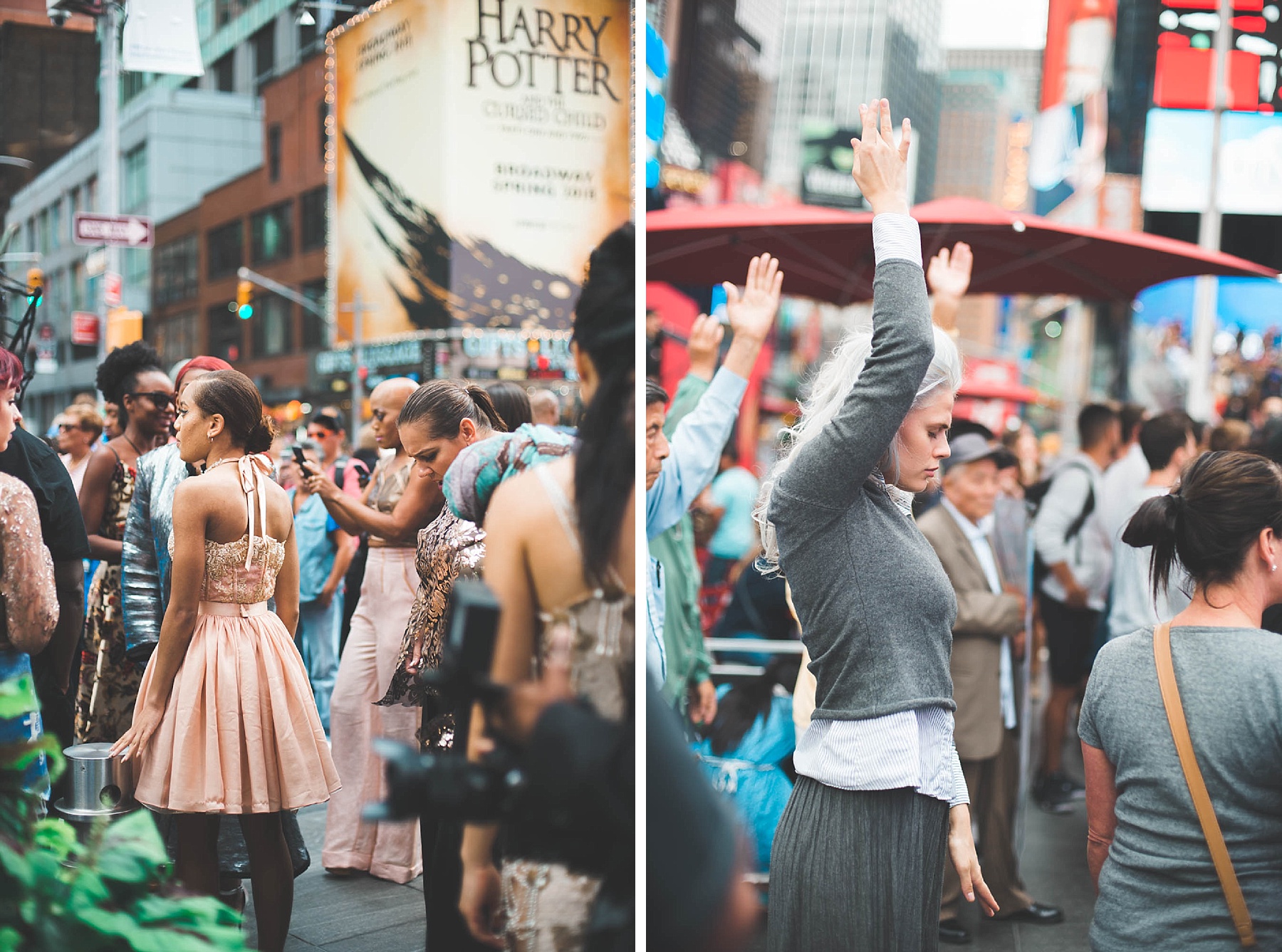 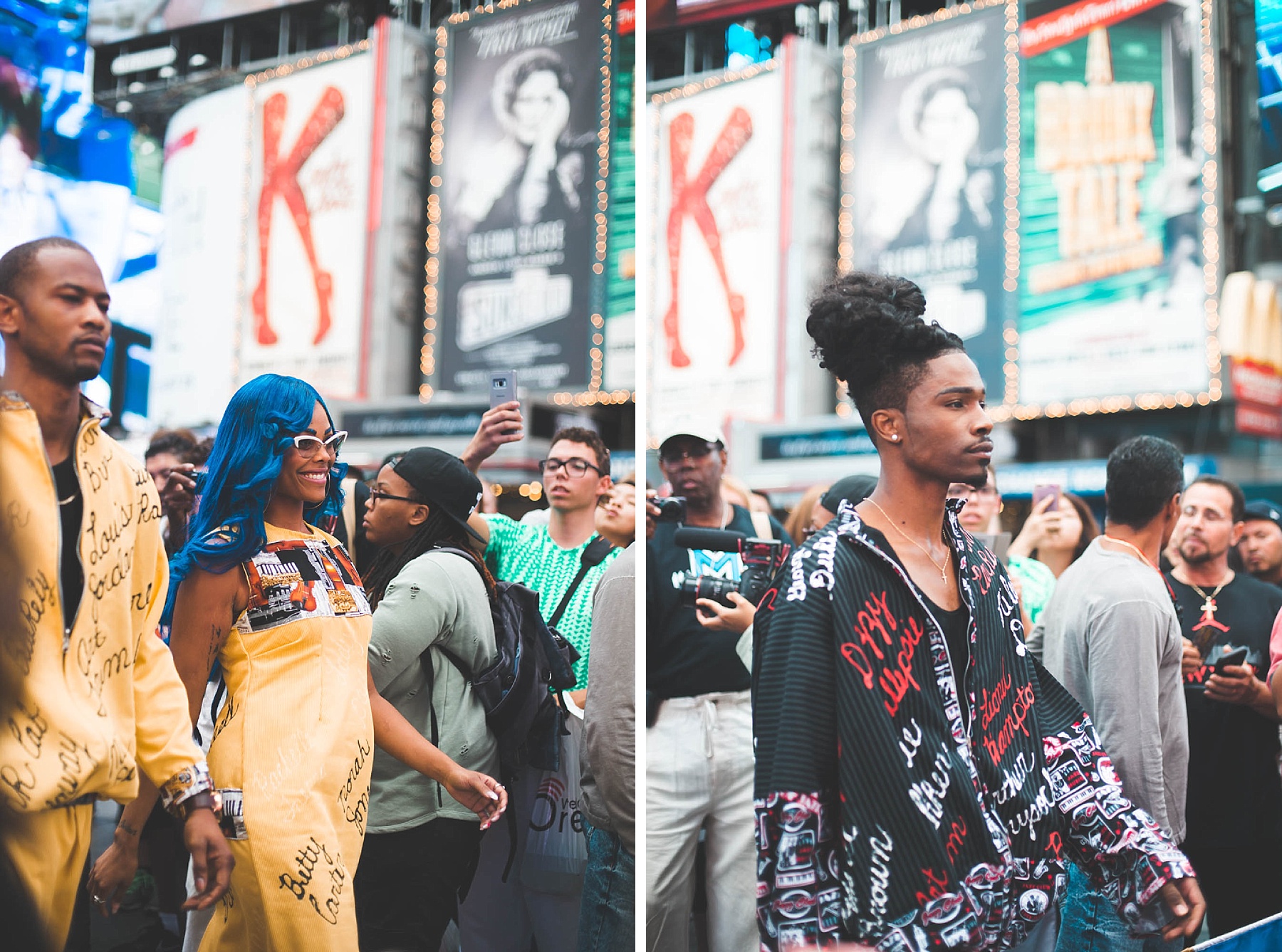 <<
watched in awe for a while then decided to attempt to get the subway to Brooklyn. Challenging on this particular day as they closed one of the lines for the weekend, but we eventually made it. Too late to get on the Brooklyn bus tour, but we walked down to the pier to take in the bridge from below. One word – Stunning. 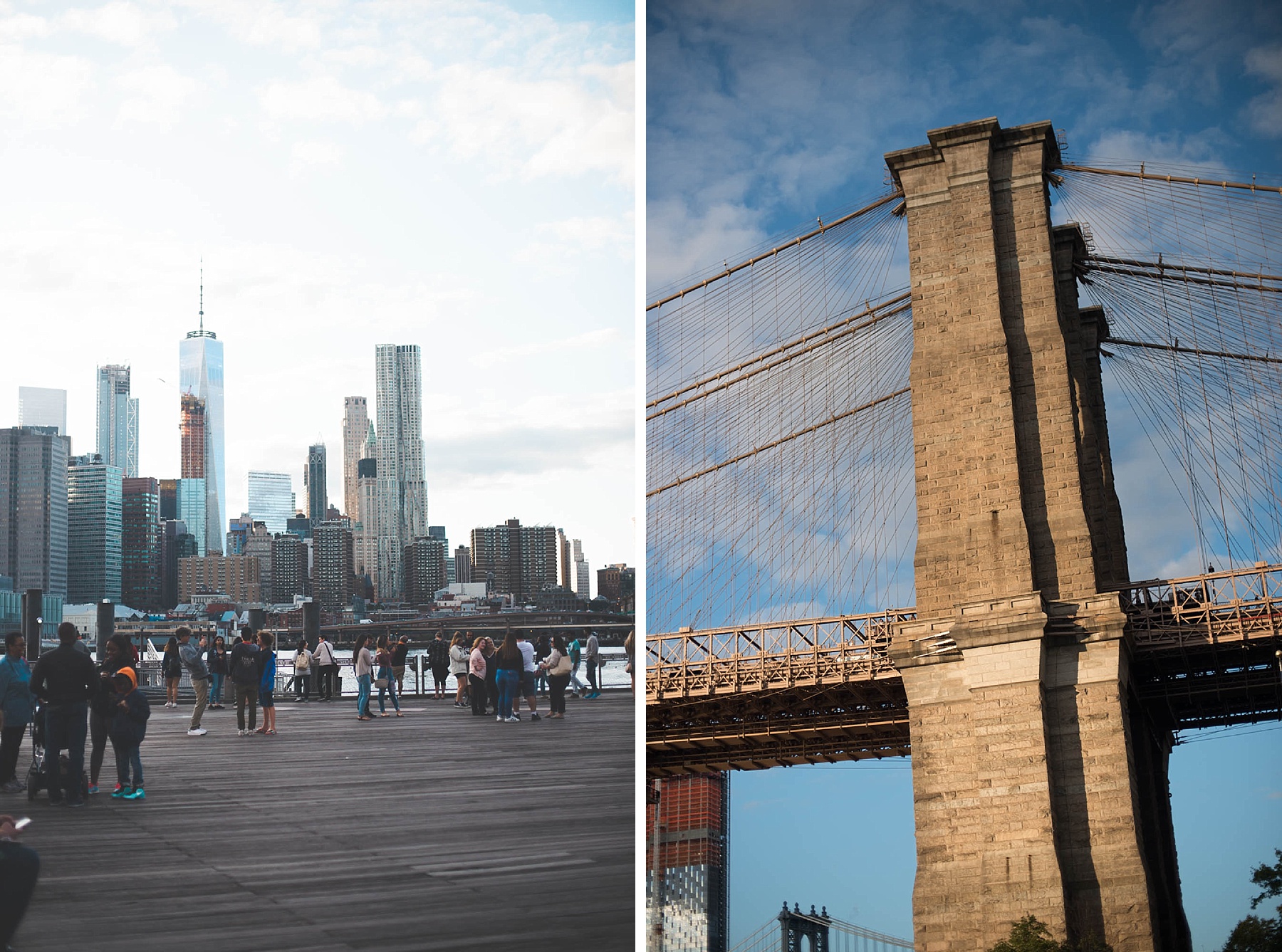 <<
wanted to try to get back to somewhere downtown for a nice meal to finish our day with a bang, but we literally couldn't get out of Brooklyn. Ticket machine wouldn't take cash, attendant wouldn't take our money either as the bills were too large. Ah well, best find a way to make this bill smaller – if I have to drink wine, I guess I will do it, for the cause of course.

A short walk from the Brooklyn Bridge station there was an adorable little wine bar. We had a vino, and a cheese platter, and I was in heaven (I feel like I was so excited to eat it, I forgot to photograph it! Haha! Sorry!) We had a yummy goats cheese with honey and an aged Gouda that will be the theme of my dreams for the duration of my life.

<<
0 poorer, but in the possession of smaller money, we bought our subway pass and ventured back to the hotel.

<<
or rhys has tolerated feeling feverish and sick for the day, so we stop to book a restaurant and have 30 mins downtime. We booked an ultra fancy restaurant downtown and I wanted to plan a rooftop bar visit too! 10 mins into our rest we realised we are actually shattered and with our shuttle arriving at 3:40am 😱 we realised, sleep may be the best plan.

I did have one last New York bucket list item on my mind… making a large purchase on 5th ave.

…Yep! This is happening! Dinner reservation cancelled, and we are off on a mission, to the Apple Store 5th Ave we go! Time to upgrade the brick computer … EEEK!

Computer purchased at a great exchange rate! And also cheaper through US Apple! And I am one VERY happy gal!!

Stopped to pretend to eat breakfast at Tiffanies on the way back for my Leah, and then we picked up some nibblies and a slice of pizza for dinner! Just what I needed! (And possibly all I can afford now haha) 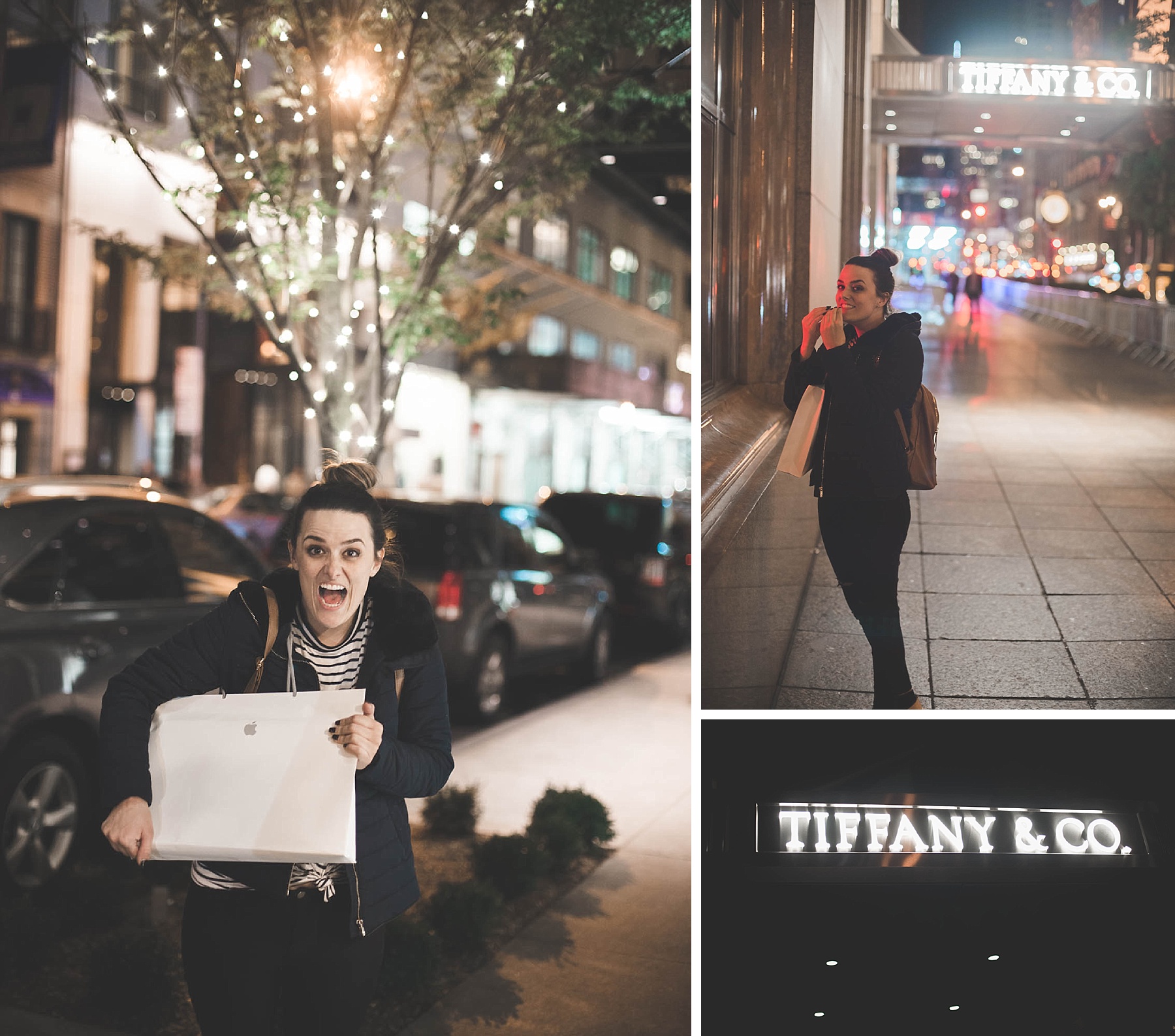 I truly wish we had more time in New York, but we wet the appetite, and maybe now we will have a stronger drive to come back some day and explore it further!

Sleep time now, we have a stupid early wake up tomorrow morning! See you in the AM!