We had a pretty packed schedule today! We wanted to go to the two big museums and later, the Anne Frank Haus. We are pretty efficient tourists so we managed to get it all done in a day. First we went to an restaurant that served up a hearty English breakfast, I couldn’t resist and Rhys ordered the meatballs. With a good feed in our bellies we set out for the day.

We caught the tram to what we thought was a close station to the Van Gogh museum. It was nowhere near, in fact the walk from our hotel would have been shorter. The Van Gogh museum was amazing and really informative. It made me so sad looking at his art though, because you can almost see his frustration in his work. Reading about how he shot himself, and died later, never knowing his work was worth something. So so sad! He worked his whole life never knowing his work meant anything.
Next we went to the Rejksmuseum, which has Rembrant paintings and other Dutch paintings from the Golden age. It was also really great to see, although at one point I turned around to find Rhys was missing. I spent half of my time walking in circles looking for him and not finding. He had my phone too so it was a little unsettling. I went upstairs to find him casually looking at art, he didn’t seem too worried haha! Funny boy!

Afterwards we spent a good 15 minutes trying to work out the tram system to get to Anne Franks Haus, but we found one that would get us to a stop nearby. There was a bit of a queue when we got there, but well worth the wait! I didn’t expect it all to the so well organised! It was amazingly informative and it unfolds like a story as you walk through. It was sad being here though, putting faces and places to the tragedy. For anyone that is going to Amsterdam, this is a must!

It was starting to get dark by now, and our stomaches were grumbling. Food time! We saw a really cute Peruvian restaurant on the canal. It was very busy when we saw it last night, and it was busy again tonight so we had to eat here!. There were no tables so we just sat at the bar. They had a special offer, 3 course meal for 27 Euro each. We decided to go for that. First course, beef skewers, I had the ceviche. Mains were chicken and ravioli, I got the beef with rice. Very punchy, spicy flavours. Different to anything we have had before, but good! Dessert was “Chefs surprise” Very sweet, caramel flavoured cakes and tarts. The restaurant was so packed, obviously a local favourite. 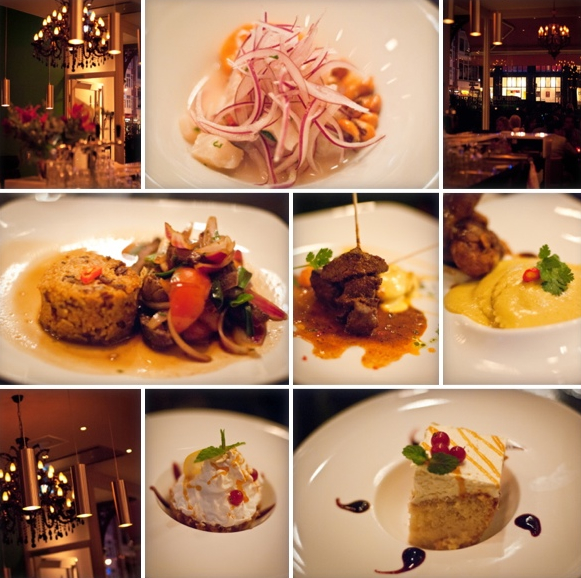 After dinner we walked around for a while and headed toward the “Red light district”. I am sure most of you have heard about this area in Amsterdam, if you haven’t … google it, you will be well informed 😉 Some of the girls looked like dolls, some were so pretty it made me wonder why they chose this for a living. Each to their own I guess? We looked across and there were some in blue light that looked stunning! We read later that the blue lights are women that aren’t really women, if you know what I mean. Very pretty boys though 🙂 There were many shows, and adult shops around. When you went off the main strip you could see more women in their little booths, these women were a bit more “real” sitting with their guts hanging out in their lingerie, legs open, talking on the phone . The best part of the red light district was the one booth that is inbetween the women that held the “Red light radio” Just a bunch of guys playing house music, getting stoned and dancing on air. It was fantastic!

It was pretty late so we walked to the tram and went back to the hotel. Tomorrow, Heineken Experience and hopefully a canal tour.
E